The honeymoon is over for Abdullah Badawi 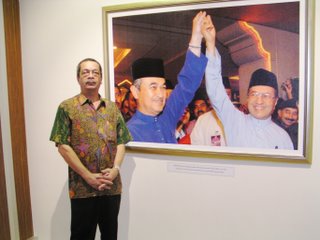 Prime Minister Abdullah Badawi is facing the difficulty of moving away from Tun Dr Mahathir Mohamad's shadow and asserting himself, while not arousing the ire of his former boss. Abdullah has shown that he is politically skilled, but he will need support and a certain amount of luck to succeed.

Can Abdullah count on his deputy Najib Tun Razak for support knowing for a fact that Najib is closely associated with Mahathir. It was Mahathir's wish that Najib be appointed as Abdullah's deputy over Muhyiddin Yassin, the agriculture minister.

When he assumed office, Abdullah has indicated that he will move away from 'mega projects' and will instead focus on agricultural and small business development. This may or may not discourage cronyism because agricultural development and small businesses are harder to skim huge amounts of money off the top of, and these types of projects will be less accessible and less attractive to the old-guard tycoons.
Thus, Malaysia may enjoy the best of both worlds - increased transparency and competitiveness to go along with the lure of a well-developed infrastructure.

Abdullah does not have the solid hold on the reigns of power that will allow him to be perceived as favouring one group over the others. If he allows cronyism to flourish anew, he risks losing credibility with youn ger Malaysians still forming their political loyalties.

His reputation as a consensus-builder should further soothe the misgivings of international investors. One good example is the scrapping of the multi-billion ringgit bridge to replace the Causeway, which, however aroused the ire of Mahathir.

As Abdullah follows a moderate path, institutions that were cowed under Mahathir are slowly reasserting their constitutional purview. This will increase transparency and improve governance, anhancing Malaysia's image among human-rights watchers.

We must not forget that Mahathir has been labeled a visionary and will go down as a national hero in Malaysia - people will remember him when they look at Petronas Twin Towers, KLIA and Sepang F1 Circuit, just to name a few. Under his leadership, Malaysia's per capita income grew from RM4,630 in 1982 to RM14,877 in 2003; a true middle class developed society.

His style not withstanding, Abdullah does not have the political capital to dictate his terms. He will need to be more open to other views and will need support of other leaders to buttress his administration. In the long-term, this will provide stability and more enlightened policy making. For Abdullah, the honeymoon is over.
Posted by Unknown at Monday, May 01, 2006