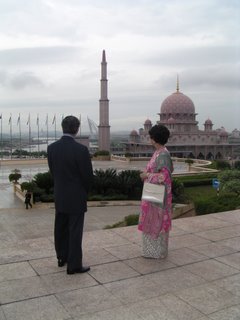 Former Malaysian Prime Minister Dr Mahathir Mohamad said Saturday that he failed to resolve outstanding issues with Singapore as it was "difficult to negotiate" with the city state.

He admitted that during his 22 years as Prime Minister he failed to negotiate settlements on outstanding issues between the two countries. He said the negotiations ended in failure because the tiny island republic always wanted more from Malaysia than what it was willing to give in return.

Well Dr M, we Malaysians are familiar with the "kiasu" attitude of Singapore. Look at the current Commonwealth Games in Australia, Singapore imported badminton and table tennis players and athletes from Indonesia, China and Taiwan just to make sure that they collected some medals. That is "kiasuism" and it is well suited with Singapore. To them, money will buy anything including athletes, to win medals for them.

Singapore rejected the construction of a bridge to replace the causeway unless Malaysia give permission for their air force to use Malaysian air space and sell sand for their reclamation programme. But what do they give in return - nothing. That is Singapore.

Pix: Dr Mahathir and Dr Siti Hasmah enjoying the view of the Putrajaya Mosque, from the steps of the Prime Minister's Departmnent on the eve of his retirement (Oct 30, 1993)
Posted by Unknown at Sunday, March 26, 2006

We know pretty well the attitude of Singapore towards our country. Our leaders are also aware of the ugly truth that prevails in the relationship between Malaysia and the island for which one of our most decorated wariors, Lt. Adnan Saidi, has sacrificed his life. But what measures and strategies have we taken to make sure that we are not at the losing end in any negotiations with the republic?

I am just curious.

I am afraid our political leaders are not "smart" enough to face the Singaporeans. If Dr M himself failed, I do not think other leaders can achieve anything better. Being a former "resident" of Singapore for some four years, I am aware that Singapore obtained much more than what was given to Malaysia. Take the Woodlands naval base for example, it was a big loss to Malaysia, strategically and economically. Next to go and in a matter of time is the Keppel or Tanjong Pagar railway station. As for fresh water, Singapore is now nearly self-sufficient and out supply is regarded as a major source of "reserves". Mind you, they are smart and we are, I would not say stupid but not so smart. The crooked or scenic bridge, I am still trying to figure out how scenic it would be, is a good example of our mentality. The Law of The Seas is on their side and yet we want to go ahead with the construction of the bridge.
Ansul, I am just as curious...