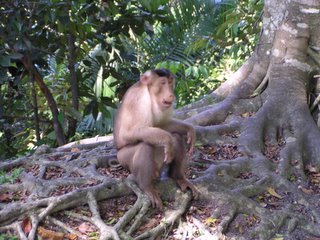 There are 19 species of macaques identified by scientists so far. Three of the 19 macaque species lives in the jungles bordering Taman Tun Abdul Razak, Ampang Jaya district, Selangor. Of the three, the pigtailed macaque (pix above) and the longtailed macaque comes out of the jungle to be fed by human beings. The silverleaf macaque or lutong in Malay, seldom do so but once in while will show up to eat the juicy fruits of the fig trees.

In the east coast states of the Malay peninsula, that is Kelantan and Terengganu, the pigtailed macaques are trained by men to pluck coconuts.
Posted by Unknown at Tuesday, March 07, 2006

Nice photo of pigtailed macaque. Actually there are four types of monkey in Tmn TAR (two macaques and two leaf monkeys). There is the dusky leaf monkey (lutung) and the banded leaf monkey (ceneka). There are also two gibbons (the siamang and the wawa).