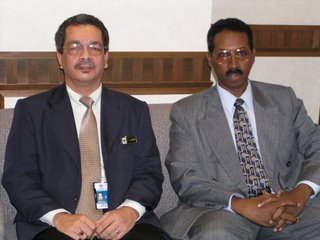 The United Nations World Food Programme (WFP) has warned that millions of vulnerable people in Kenya and Somalia could face a catastrophe if sufficient food donations are not delivered to them in the coming months.

WFP described the situation in the two countries as "serious - very serious".

Some 1.4 million people are facing starvation in Somalia due to the never-ending security problem. Lately, armed militias loyal to a new alliance of faction leaders are fighting against armed militias of the Islamic courts.

Security issues have hampered overland food convoys while a spate of ship hijackings off the coast of Somalia last year (2005) closed WFP's normal supply routes for food aid by sea.

Somali leaders must set aside their differences and guarantee safe passage of aid to those in need.

What is the so called free world doing to help Somalia? The United States should focus its attention to this part of the world instead of creating tension and unstability in the Middle-east by targetting Iran after Iraq. Bush should not waste American wealth and lives of her young men and women by going to war "to protect' its security, which is clearly false just like its claims that Iraq had WMDs.

Pix above: Yours truly, Syed Imran Alsagoff (left) with President of the Somali Republic, H.E. Abdinur Darman, (before the formation of a Federal Transitional Parliament in 2004). The Somali President was in Malaysia in 2003 and had called on the then Minister, Prime Minister's Department in Putrajaya.
Posted by Unknown at Sunday, March 12, 2006