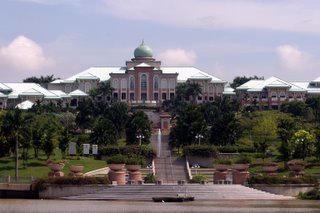 Prime Minister Abdullah Badawi's son-in-law Khairy Jamaluddin is certainly hot news. He is said to be an up and coming politician and is now the number two man in Umno Youth, the junior wing of Abdullah's main Malay political party.

Khairy or KJ to some people, is being chased, literally, by at least two on-line news establishments.

Agendadaily, a popular Malay language news portal, was disappointed when the soon to be 30-year-old KJ did not reply to their e-mail as promised. KJ was asked to comment on what was written by Kalimullah Hassan, deputy chairman and editorial advisor of the New Straits Times (NST) on what was discussed, in a closed-door meeting, of Umno's information bureau. Kalimullah is not a member of the bureau. (please see my earlier postings).

KJ is Kalimullah's business partner. I am uncertain whether they are genuine business partners or simply sleeping-partners. It is common among Umno leaders at various levels to be "business partners" especially to non-Malays. As sleeping partners, they were paid handsome fees to use their political standings to get contracts or projects reserved for bumiputras or Umnoputras to the opposition parties.

The internet news media also reported that KJ is "close" to actress Maya Karin, which he denied.

Apart from KJ, PM Abdullah's political secretary in the finance ministry, Reezal Merican Naina Merican, is being sued for divorce by his second wife, actress Sharifah Norhaslinda. Reezal Merican is a member of the Kepala Batas Umno division in Penang headed by Abdullah.

My sympathies to Abdullah Badawi.
Posted by Unknown at Tuesday, March 07, 2006