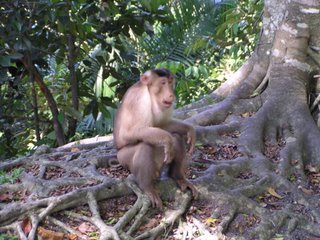 A non-governmental organisation (NGO) has called for the closure of the Kamunting Detention Centre, in Taiping. The centre is used to detain without trial, among others, political detainees under the Internal Security Act (ISA).

The Gerakan Mansuhkan ISA (GMI) or abolish ISA movement leader, Syed Ibrahim Syed Noh said prime minister Abdullah Badawi should apply the same principle to the detention centre as he espouses for the closure of the US-operated Guantanamo Bay detention centre in Cuba.

He said the government should also adopt the recommendations made by the Malaysian Human Rights Commission (Suhakam) to abolish the ISA. Syed Ibrahim also called on the government to release all the ISA detainees or otherwise charge them in court.

The pig-tailed macaque is free to roam the forest and its fringes in Ampang. On the other hand, hundreds of humans are under detention without trial in detention centres in Taiping and in Johor. Some of them were separated from their families just because they subscribe to different political ideologies.
Posted by Unknown at Thursday, March 30, 2006