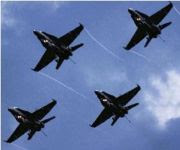 Malaysia Parliament opposition leader Dr Wan Azizah Wan Ismail said the government should set up an independent commission of inquiry into the purchase of military hardware, especially the Scorpene submarines and the Sukhoi jets.

She claimed that the purchase of two Scorpene submarines worth RM4.5 billion through negotiated tender had attracted attenion as a commission exceeding RM530 million had been paid to Perimekar Sdn Bhd owned by Abdul Razak Baginda.

Dr Wan Azizah told Parliament on Monday that Razak was an adviser to then and current defence minister Najib Tun Razak.

She said in the purchase of the Sukhoi jets worth RM3.2 bllion, IMT Defence Sdn Bhd, a company controlled by former Melaka chief minister Adib Adam, was paid a RM380 million commission.

However, the following day Najib clarified that negotiations for the procurement of the Sukhoi SU30MKM jets and Scorpene submarines had received approvals at all levels and adhered to the procedures required.

Meanwhile, Defence Ministry said in a statement Dr Wan Azizah's allegations that the government paid commissions totalling RM450 million to Razak in connection with the submarine purchase was without basis as no commission was paid.

The statement added that the submarine procurement was carried out via direct negotiations under the terms of the government's procurement procedures with the manufacturer, Armaris (France) and Navantia (Spain), which had received approvals from their respective governments.

According to the statement, Syarikat Perimekar was only given a contract to provide support and coordination services for a period of six years and the contract value of 11.96 million euros was paid in stages in accordance with the progress of the project. The scope of support by Perimekar is to provide facilities and equipment and health insurance for the 27 families of the team members of the project in France and Spain.

As for the Sukhoi jets, the defence ministry said it was done through direct negotiations with Rosoboronexport, a Russian company.

Rosoboronexport had appointed a local company to "facilitate its dealings" in Malaysia which the ministry claimed were "normal business dealings" which did not involve the Malaysian government at all.

I would like to add further information, certainly unclassified, to the above episode:

The MOU "opens up" new vistas for further promotion of long-term friendly ties in the field of military-technical co-operation on a mutually beneficial and equitable basis.

During former prime minister Tun Dr Mahathir Mohamad's trip to the Khabarovsk Territory and the Buryat Republic in August 1999, he had an ample opportunity to personally make certain of a vast existing potential for Russia and Malaysia to collaborate in the said co-operation.

Putin also placed on record that "all obligations" assumed by Russia in the military-technical sphere will be carried out in full, without any political or ideological strings attached, and with appropriate guarantees.

In 2000, Putin and Dr Mahathir held talks in Brunei when both attended the APEC Summit. Russia was ready to supply additional number of aircraft with further improvement to the system for the technical service and combat operation.

Most of the Russian offer was not taken by the Malaysian government. Malaysia opted for the Scorpene submarine, Poland-made T-90 main battle tank, and multiple launch rocket system from Brazil.
Posted by Unknown at Wednesday, May 07, 2008

Syt. Peri...., "Support etc Services!" Spare me! To SUPPORT, the SUBMARINES, the only "persons" to do so would have to be THE ROYAL MALAYSIAN NAVY{TLDRM}! So who are these people! w have Sold & sacrificed our Navy & all of the personnel to a ......{oops ! Sedition}
Support Services!!!! My East End of My West Bound Camel!!!!

I received additional information on the purchase of the Sukhoi MKM from Mr Ahmad Mustapha Hassan, author of "The Unmaking of Malaysia" and former general manager of Malaysia National News Agency (Bernama) and I would like to share them with you.


I just like to add certain facts on the purchase of this aircraft.
Adib's company and my company were trying to market this aircraft to the Malaysian Government. I represented Knaapo, situated in Komsomul-un-Amur, in Siberia. When Dr Mahathir visited Khabarovsk, he also visited Knaapo. This was the first time he saw the aircraft.

He was given a demonstration on the capability of the aircraft piloted by one of Russia's noted test pilot.(sorry, I forget his name).

We took part in LIMA Langkawi and in fact Adib and I were competing to sell our respective products. We also took part in other air shows like in India and Russia.

Knaapo is a Russian government company and it is this company that has been supplying all the fighting machines to the Russian Air Force.

The other company represented by Adib was Irkutz, a much smaller privatized company. It was never before involved in the mnufacturing of fighter jets. Also at one time it was facing financial difficulties. It gained a breather when it concluded a contract with India. In this contract, the Hindustan Aircraft Co. would also be involved in the manufacturing of the Sukhoi MKI.

Right from the very beginning the Russian government, from the President, the Defence Ministry, Roboronexport wanted Malaysia to buy the product from Irkutz. They gave their full backing to Irkutz. In any case, at that time Irkutz was helmed by a very capable and pr savvy CEO.

I was completely sidelined by the Russian authorities. They refused to register my company as agent although we have all the necessary documents. Rosoboronexport completely ignored us. I believed they must have been directed by their authorities to place obstacles in our effort to market Knaapo products.

We were the first to do a representation of the products to the Malaysian Mindef. Knaapo, not only supplied aircraft to the Russian government but it also had contracts with China. A number of other countries were also looking towards Knaapo, including Indonesia. Knaapo's price was much lower but we were simply blocked from getting the necessary approvals from the Russian government.

Knaapo's Sukhoi was fully equipped with Russian manufactured products. This is not with Sukhoi MKM. I was told, there were 14 vendors involved in the manufacturing of Sukhoi MKM.

Suffice for the moment although there are many more things to be mentioned.

nice to read you blog.
my comment bout this is, the rakyat needs something to eat now (beras). we don't eat those metal-figure that i think just to shows off. the TLDRM also need to eat for courage. and opps... seditious..?? sorry i mean it. i am rakyat. Kuda Ranggi, you should add at your sidebar after the dutch words.
We can survive without Dutch products.
Kita mampu hidup tanpa barangan Belanda. But We cant Survive if beras kurang dan mahal!