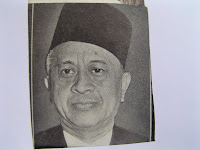 (His Excellency Raja Tun Uda, first Governor of the State of Penang)

I was in Penang on Merdeka Day but sad to say that the "Merdeka spirit" was somehow missing. Many buildings including business premises did not fly the Malaysian flags, and like most of the other Malaysian states, the number of vehicles "flying" the Jalur Gemilang were hardly seen on the roads.

Penang's new bus service, Rapid Penang - a subsidiary of Rapid KL, received overwhelming support from the public. At last, commuters can travel in air-cond comfort from the city to Teluk Bahang and various parts of Balik Pulau on the island and to major towns in Seberang Perai.

However, old habits die hard. Rapid Penang, though popular, failed to deter "private sapus" or unlicensed taxis (private cars) from operating in the city. I noticed that the "private sapus" were freely picking up passengers in front of Chowrasta market, right opposite the Penang Police Contingent Headquarters. Most of the cars operated by the "private sapus" were old models of popular Japanese makes. Where are the enforcement agencies?