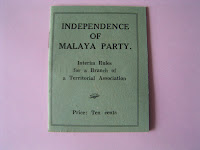 Object of the Independence of Malaya Party (IMP) -- "To strive for the establishment of a Sovereign Independent State of Malaya aiming at the well-being and advancement of the People based on equality of opportunity and of political, social and economic rights and obligations." 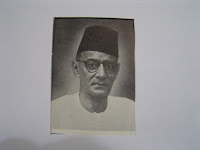 Dato' Sir Onn Ja'afar, the founding father of UMNO, commanded much respect and affection from people in all walks of life. He wanted to open the doors of UMNO to whosoever wishes to be a member, irrespective of his racial origin, provided he accepts the basic policy of UMNO and accepts the charter of the party. When his proposal was rejected by the party, he left UMNO to form the IMP. Tunku Abdul Rahman Putra took over the party's leadership on April 1, 1951.

"Malaya is now on the road to democratic Government leading to self-government. It is therefore important that everyone, particularly the younger men and women of the country, should gain an understanding of the machinery of politics and of the principles and policy of political parties and of obtaining an understanding of national and local affairs of this country," Dato Onn said in Kuala Lumpur on Augsut 21, 1953.

He said, to talk of democracy is easy, to understand properly how democracy operates and how it can be made to work always for the public good entails knowledge.

"Those who take a practical interest in the way in which the country is governed are those who can most influence the government and the future of this country. The crosses on the ballot paper will determine what sort of government, whether local, State, Settlement or Federal, we shall have.

"As the peoples of the Federation become more and more politically conscious, the more will it be necessary for a national party such as the I.M.P. to define its attitude to matters of national and local interests and to spread the knowledge as well as to foster thought and effort in furtherance of the objects of the Party."

Unfortunately, Dato Onn's vision was way ahead and beyond the thinking of the population then, in fact, to a certain section of today's population. We are still thinking on racial and ethnic lines, we are still supporting racialist political parties and implementing policies based on ethnic interests. And we are celebrating our nation's 50th anniversary.
Posted by Unknown at Wednesday, August 08, 2007

With patriotic Malayans as portrayed by those MCA Chinese (mostly Well-Educated Babas!); YES, there's no problems in sharing as everyone was willing to COMPROMISE UNSELFISHLY.

In current uncouth DAP's "twisted" USE of "Malaysian Malaysia" concept - they themselves, whose ancestors were primarily from the "uncivilized" Chinese labourers - were NOT even aware of what actually happened, or, how our Nation's peaceful MERDEKA was transpired & could EVEN materialized;
had SUCCESSFULLY managed to SIMPLY "twist" Dato' Onn's "Civilized" Malaysian Malaysia concept.

DO Remember that DAP is the splinter of PAP when we ousted Singapore out of Malaysia with a vote of 126-0!!
Eversince PAP joined Malaysia in 1963, they had always created racial tension and unrest demanding chinese "domineerance" in every aspect & continued to intimidate the Malays.

Their continued Racial INTOLERANCE instigated the constant Racial RIOTS that happened in 1964 in Singapore.

BUT, as we all had seen and PROVEN in Penang, Selangor & Perak respectively; the minute they're in "power" the Very 1st thing that they focussed on were those that touched the very principal of our constitution that concerned the Malays (which of course, includes Islam & the King/Sultans) - ie. the DEB, the MEGA pig project & land giveaways in those 2 states, respectively!!

Those PROVEN racist bigots are totally NOT for equality - like PAP in '64, they simply want "power" & DOMINEERANCE over the Malays!!

PLEASE Remember the background of the people - THEN, As Compared NOW -
and Determine TRUTHFULLY to ourselves IF... they are Sincere, or, just Plain Selfish!