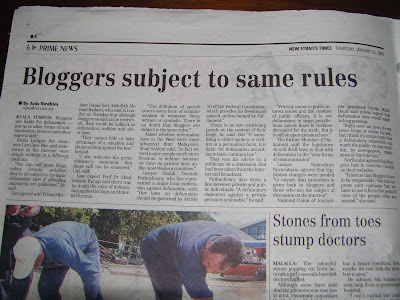 Is this news report (New Straits Times Thursday, January 25, 2005) prejudice? or pre-judgement? or misjudgement? or hasty conclusion? or bias?

The NST report quoted several lawyers and "experts" in reference to what Prime Minister Abdullah Ahmad (Badawi) said in London as reported by the NST (January 24) when he was asked to respond to the suit being taken against bloggers Ahirudin Attan and Ooi Chuan Aun.

According to Allport in his book "The Nature of Prejudice" (1954), there are differences between "ordinary pre-judgements," which all of us periodically engage in, and prejudice, a special type of pre-judgement.

"... prejudice is an antipathy based upon a faulty and inflexible generalization. It may be felt or expressed. It may be directed toward a group as a whole , or toward an individual because he is a member of that group."
Posted by Unknown at Saturday, January 27, 2007

It is heartening to know that the spirit of setiakawan & camaraderie is still very much alive among us.