As expected, Singapore to claim territorial waters and EEZ


As expected, Singapore is to claim its new extended territorial waters and exclusive economic zone (EEZ) after it succeeded in obtaining ownership of Batu Puteh or Pedra Branca (white rock or batu puteh in Portuguese). The International Court of Justice (ICJ) awarded Batu Puteh's ownership to Singapore while confirming Malaysia's authority over Middle Rocks. 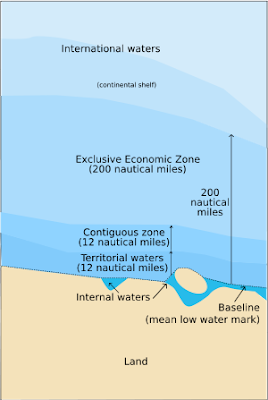 According to the 1982 United Nations Convention on the Law of the Sea, territorial waters, or a territorial sea, as a belt of coastal waters extending at most 12 nautical miles from the baseline (usually the mean low-water mark) of a coastal state. The territorial sea is regarded as the sovereign territory of the state, although foreign ships (both military and civilian) are allowed innocent passage through it, this sovereignty also extends to the airspace over an seabed below.

According to Wikipedia, the free encyclopedia, the term "territorial waters" is also sometimes used informally to describe any area of water over which a state has jurisdiction, including also internal waters, the contiguous zone, the EEC and potentially the continental shelf.

The baseline from which the territorial sea is meaured is the low-water line along the coast as marked on large-scale charts officially recognized by the coastal state. This is either the low-water mark closest to the shore, or alternatively it may be unlimited distance from permanently exposed land, provided that some portion of elevations exposed at low tide but covered at high tide is within 12 nautical miles (22 km) of permanently exposed land.

A coastal nation has control of all economic resources within its EEZ, including fishing, mining, oil exploration, and any pollution of those resources. However, it cannot regulate or prohibit passage or loitering above, on, or under the surface of the sea, whether innocent or belligerent (war-like, within that portion of its exclusive zone beyond its territorial sea.

The NST correctly described Singapore's claims of its "territorial waters and EEZ" as "Lion's share". The Singapore Lion or Merlion is claiming its share of the meat.

The question now is to clarify whether Batu Puteh is an island as defined by international laws. If it is not an island, can Singapore lay claim to extend its territorial sea and EEZ? The ball is now in Wisma Putra's court.
Posted by Unknown at Wednesday, July 23, 2008

"win-win situation" BATU PELIR KAMBING for Malaysia!
What is BATU PELIR KAMBING?
Akar batupelir kambing, or Kambing-kambing, is Sar-colobus globosus, Wall.—Asclepiadaeeae. The botany has been described by Ridley : " A long climber with a slender brown stem rather thicker than a crowquill covered with a brown thin bark. The leaves rather thin and fleshy, ovate to lanceolate, 3 inches long by 1 1/2 wide with a broad rounded base, and a petiole 1/2 inch long, opposite. The flowers are in small clusters on short stalks £ inch long. Each flower is 1/2 inch across, pale purple in colour, with few rather broad lobes and a very short tube. The fruit is large and oval in outline with a strong keel on one side. It is 3 inches long and as much through, brown and rough with very small warts. When cut through it is seen to have a thick rind 1/2 inch through, white and pithy, and con¬taining, as does the rest of the plant, a quantity of latex. This rind which when fresh is quite tasteless is the eatable part of the plant. The seeds are ovate, flat, thin discs, an inch long and 3/4 inch across, and form a large mass overlapping each other. They are brown and possess a broad thin wing all round the seed itself " (Ref. 19). It is found in the Straits Settlements and Malay Peninsula, and extends as far north as India, being found near the sea-coast, in mangrove swamps, and along the banks of tidal rivers. The fruit resembles in shape and size the testicles of a goat, whence the Malay name.
Akar batu pelir kambing is used by Malays to poison dogs, elephants and cattle ; the poison is contained in the seeds, which are called pitis buah by Kelantan Malays. They are so named from a fanciful resem¬blance to a coin of very small value used on the east coast: each seed is about the thickness of ordinary paper; there are about 100 seeds in each fruit. As a poison for small animals the seeds from one half of a fresh green fruit are dried and powdered. This powder is mixed either with boiled rice or any other food that the animal is accustomed to eat; it is employed by burglars to kill watch-dogs, and causes paralysis (patah pinggang) in them and other quadru¬peds. For large animals, such as the elephant, bul¬lock and water-buffalo, all the seeds from a fruit will be required. Although pitis buah will kill a dog outright, Malays add white arsenic and the juice of the lime fruit to the powdered seeds when they wish to make more certain of destroying the animal.
In September, 1920,1 gave rather more than half the number of seeds of a Sarcolobus globosus fruit to a large healthy male pariah dog that weighed 28 lbs. The fruit had been gathered fresh three months before on a small island (Pulau 'Che Tahir) in a tidal creek near Tumpat, the sea-port of Kelantan. The dried seeds were ground up, mixed with cooked rice, chopped meat, fish, and condensed milk. The dog ate the poison at 4.30 p.m.; at 9 p.m. it was lying down and could not stand. It vomited and purged and died about fourteen hours after the administration. Shortly before death it was in tetanic convulsions ; the pupils were dilated.
The allied species of Sarcolobus, viz., S. Spanoghei, Miq., and S. virulentus, Griff., are recorded as poisons. The first of these two jungle climbing plants is called wali kambing in Java, where it is used for destroying tigers. Under the name of S. narcoticus, Greshoff gives an account of the poisoning of tigers by putting S. Spanoghei into the bait . He extracted a toxic substance from the bark, but did not ascertain its chemical nature. In his Indian Poison Eeports, 1902, he remarks that S. narcoticus causes rigidity when the fruit is roasted, pounded, mixed with food and given to animals. Analyses of specimens of S. globosus sent to London from Kelantan have not been completed at the time of writing. Fresh coco¬nut water is the antidote used by Malays to counteract this poison when accidents occur to man.
Like the poisonous yam gadong, the fruit can be used as food. The rind is often cooked and eaten as a vegetable; but, like gadong, it is always carefully washed, generally in salt and water, before it is con¬sumed. It is used to make a conserve in Malacca ; after being cut into pieces, soaked in salt and water for three days, and washed with fresh water for three days, it is put into boiling syrup. The Kelantan recipe is to remove and slice the rind; the slices are hardened by soaking in lime water (aqua calcis; ayer kapur) for two or three hours, washed in clean water and boiled for some time, and finally dropped into boiling syrup. This jungle climber, akar batu pelir kambing, must be distinguished from a small village shrub, called pokok batu pelir kambing, Eau-wolfia perakensis.
-makangaji.

You have pointed out correctly that Singapore's territorial claim depends a lot on whether Batu Putih is an island. I understand that, as per ICJ's decision, Batu putih are just rocks.

But knowing Singapore's mentality (remember they are being trained by Israelis) it is a matter of time Batu Putih will be transformed into a bustling island. An island that will be inhabited by at least 10,000 people and with sutainable eaconomic activities like resorts, marine research institute, small scale farming, fishing industries, marinas, airstrip for small planes and helicopters,island adminsitrative centre, duty free zone etc.

Tuan Syed,thank goodness you are no more with Rais Yatim. He has now lost my respect absolutely. See what position can do to a person like him.And he is now talking a lot of gibberish for someone who did a doctorate's degree at King's College. Amazing. He is no better than his fellow Cabinet members. You better advise to spend his time in photography which he excels.Minister win win.