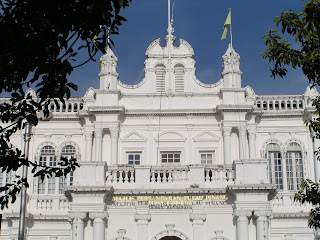 George Town, the state capital of Penang, is 51 years old as a CITY today, January 1. There are no celebrations put in place, nothing at all to celebrate its 'birthday'.

George Town, was made a City on January 1, 1957 by royal command of H.E. Queen Elizabeth II, the only town East of Suez to receive the royal status from the Queen of England and Head of the Commonwealth.


The City status was not revoked by the Queen. Therefore, George Town or Georgetown City is technically and legally remains a City, irrespective whether it has a mayor or not.

As a boy, I used to travel in buses and trolley-buses (electric-powered and pollution free) operated by the Transport Department of the City Council of Georgetown (CCGT). Georgetown was the only place in the then Malaya to operate the trolley-bus.

The peculiar situation of Georgetown today was the result of the state government's decision to merge the City Council of Georgetown with the Rural District Council (Majlis Daerah Luar Bandar) to form the Penang Island Municipal Council (Majlis Perbandaran Pulau Pinang). It was an act of 'downgrading' a city to a municipality although George Town was recognised as a municipality in 1839.

In 1800, the English administration formed a Committee of Assessors and from this evolved the fully elected Municipal Council when on April 29, 1839 Act No XII was passed to place George Town within Municipal limits.
A proper George Town Municipal Council was set up after the Draft Municipal Act of 1846 under Section XII which empowered the Civil Authority of the Settlement of Penang to appoint a Municipal Committee to consist of five resident rate payers, two of them to be government officers, and charged the Committee with responsibility for enforcing the Act. The Draft Act also established a Municipal Fund, from which police expenses would be paid. Municipal Commissioners were later appointed under Act No XXVII of 1856 with the British Resident being one of them, the Governor was given the power to appoint one commissioner while three others be elected by the rate payers. The Resident also acted as President of the Commisioners.

In December 1956, the first ever fully elected City Council were held and at its first meeting held on Januay 2, 1957, lawyer G.H. Goh of the Alliance Party was elected President defeating D.S. Ramanathan (Labour Party). Ramanathan was elected by the Councillors as Georgetown's first Mayor, a post created by an amendment to the State Constitution.

The City Council of Georgetown never failed to hold elections to elect a mayor an its councillors. The taxpayers continued to vote in the Labour Party and later the Socialist Front or Barisan Sosialis to head the City Council until it was replaced by the present Municipal Council.

The State Government, in collaboration with the Housing and Local Government Ministry, should restore the 'enlarged' city status to cover new townships such as Bayan Baru and Tanjung Bunga or the entire North-east District. The other half of the island or the South-west District (Balik Pulau-Telok Bahang) be declared a municipality. For the mainland or Seberang Perai, the Butterworth-Kepala Batas area be upgraded as a city while Bukit Mertajam-Nibong Tebal be administered by a municipal council.
Posted by Unknown at Tuesday, January 01, 2008

The state govt, should take the initiative to restore Georgetown's city status. While small towns like Kuala Terengganu, Ipoh and Alor Setar obtain city status without much ado, the municipal status of Penang Island is a dent on Penang's image and status. What's stopping the state govt. under Koh Tsu Koon, and by extension the Prime Minister (being a Penangite) to award city status to Penang Island?