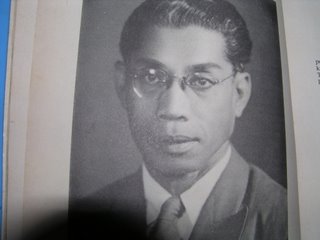 On Thursday, 31 August Malaysia will be celebrating it's 49th national day and as a run up to this auspicious day, main stream media are daily putting out writeups, features and documentaries on contributions by individuals and groups in their struggles to help the then Malaya to achieve independence or Merdeka. All three major races - Malays, Chinese and Indians were united and contributed to the cause.

However, every time we celebrates Merdeka, one name was omitted although his contributions were equally if not much more significant than some of the other names mentioned.

The man, one of the great sons of Penang, played his part as a journalist and politician, in the fight against the proposed Malayan Union, the formation of Umno and finally the independence of Malaya.

He was also jointly responsible in drafting the Proclamation of Independence (Lafaz Perisytiharan Kemerdekaan) with another Malay nationalist, Tan Sri Senu Abdul Rahman. The proclamation was read by Almarhum Tunku Abdul Rahman Putra.

I am certain that the name Ibrahim Mahmood will not ring the bell to most Malaysians today. He was unknown to most of the younger generation and in fact to most of the present Cabinet ministers and political leaders alike.

Ibrahim Mahmood was born in 1908 in Tanjong Tokong, Penang and received his early education at the Tanjong Tokong Malay school, followed by religious education at Madrasatul Mashoor Al-Islamiah (Arabic) school and the Anglo-Chinese School. He was educated in Malay, Arabic and English.

Wartawan was the first book on journalism written in the Malay language. I hope that the National Archives or the National Library has a copy of the book.

After the Second World War, Ibrahim wrote a book on the Malay language, "Nilai Bahasa Melayu" and a patriotic novel "Johan Berjuang".

In politics, Ibrahim was a founder member of Umno and a close associate of Dato Onn Jaafar, first president of the party. He was directly involved in the fight against the failed Malayan Union, particularly in Penang where he was the leader of Kesatuan Melayu Pulau Pinang (KMPP).

While serving Umno headquarters, first in Johor Bharu as an information officer in 1951 before moving to Kuala Lumpur, Ibrahim was appointed founding editor of "Suara Merdeka", the party's official organ which was later renamed "Merdeka" and then "Malaya Merdeka". He was the newsletter's editor until 1 November 1959.

In the field of linguistic, Ibrahim was a member of the board set up to formulate Malay vocabulary or Lembaga Menggubal Perkataan Melayu together with the late Datuk Haji Mohamad Said, Abdul Rahim Kajai, Othman Kalam and Zainal Abidin Ahmad or Za'ba.

Although Ibrahim Mahmood contributed so much to the country, he remained a humble and simple man and was not remembered even by his own party Umno.

It was with the grace of Allah that Ibrahim, a genuine freedom fighter and a true nationalist, returned to Rahmatullah when the nation was celebrating its 36th year of independence on 31 August 1993. He was 85 years old and remained an unsung hero.

Let us not totally ignored and forget the vast contributions and sacrifices of a great man who was one of the "back room boys" who had tirelessly served the nation.
Posted by Unknown at Tuesday, August 29, 2006

Syabas Syed Imran for putting up a story on Allahyarham Ibrahim Mahmood. Judging from his invaluable contributions to the country and the Malays, Allahyarham is indeed a great son and a hero of the nation. It is still not too late for all Malaysians, particularly Malay organisations and the Penang Government, to do something to commemorate his immense contributions to the state and the nation.

To Haji Mahrus Ibrahim of Bernama, the son of the late hero, I would say that you should be proud of your late father and hope that you wouldn't mind sharing the books written by your beloved father with me.

I would like to suggest to the relevant bodies, especially the Ministry of Culture, Arts and Heritage, to reproduce the works of the late Ibrahim Mahmood to enrich the knowledge and awareness of the present generation on the contributions and sacrifice of our unsung heroes.

Don't be too serious Bro Syed Imran, remember our jolly carefree Bernama days. We were young then.

My contribution for Merdeka:

I hope allahyarham Ibrahim Mahmood's family, especially Bro Mahrus, do have in their possession the books, in particular Wartawan.
A few years back, my humble suggestion to the Penang Island Municipal Council to rename Jalan Tanjong Tokong fell on deaf ears. Weel, I am a nobody to them, so why should they listen to me?

To bravo malaysia merdeka...I would like to say that the real source of happiness was the esprit de corps among us (Bernama staff) then. Best wishes to whoever you are. MERDEKA!

Bro Syed Imran,
Met many old Bernama hacks at a wedding recently -- Rejal, Akj, Zainoor, Karim Shukur, Rajan, Rahman Sulaiman and more. You're right. Camaraderie. Met also serving staff.
I am told Bernama has been intructed not to cover Dr Mahathir or some aspects of his activities.
Yet we're told by Musa Hitam we are freer today. But then again, had we listened to him, we would have jumped into the river together with Si Luncai a long time ago.
I misss the wisdom of Tengku Razaleigh, a real people's Prince.
Keep up the spirit Bro!

Too bad I was unable to attend the wedding reception at Cheras. Manusia merancang Tuhan yang menentukannya.
It is a sad fact today most organizations, government that is, are too departmentalised.

Love your piece on Ibrahim Mahmood. Educational indeed. You mentioned Senu Abdul Rahman. Another forgotten Malay nationalist, unfortunately. His desire to change the fortunes of his people led him to seek further education overseas, believeing that education is the salvation towards improving "nasib bangsa". Securing a job as a deckhand Senu ended up in Australia on his first attempt. Not satisfied he returned to Malaya and secured another job on another vessel, this time finding himself at the port of Los Angeles. Not knowing a single word of English, his only link in the States was a kampung buddy, 'Monty Zain Tajuddin' (who later served in the US Army). Senu toiled day and night working as a dishwasher by day and English student by night. Upon completing his english, he was accepted to pursue a degree in political science at UCLA (University of California in Los Angeles). Senu returned circa 1954/55 to his family in Jitra, after 7 years and 7 days in pursuit of education to champion the cause of his people and his still-colonised country. He then hooked up with Tunku Abdul Rahman. The rest is embedded in history. I have no detailed knowledge of the events proceeding Senu's return, suffice to say that he played a role in pre and post Merdeka, rising to become Minister of Information, and Malaysia's Ambassador to Bonn and Jakarta. Senu Abdul Rahman and Ibrahim Mahmood are among the forgotten names of Malay heroes. True heroes whose ideals were centred only on the interest of the bangsa, agama dan negara. These are the real pendekar. Al-fatihah.

Thank you for your input. There are many unsung heroes in Malaysia that did not get proper recognition. the late Tan Sri Senu and Ibrahim Mahymood were truly great sons of Malaysia.
It is disheartening to note that so many young "leaders" of a certain political party, between the ages of 30 and 40, were bestowed with titles such as datuk, datuk seri, datuk wira and what have you simply for political reasons. As the saying goes, you scratch my back, I scratch your back.

I think most people would only know Senu as Taman Datuk Senu. the rest well, not much being said in the history books anyway.

Look at the history text books these days, I don't know what craps they are feeding us. I'm from that new generations who think that I'm depreived of the informations.

They jumped up and down about the last comunnist and about singing praises to chin peng, but the have forgotten, he is part of Malaysian history, like it or not.

People would only singing praises to Tunku and other BIG names, but what about Ahmad Boestamam, Ishak Muhammad and like the unsung heroes you've mentioned, Ibrahim Mahmood and Senu?

What made them less perfect to be remembered? Is it because they are not from the royalties or they were seen as leftist? or simply because there are too many to be mentioned, so just remember the leader not the side kicks?

I think the younger generations should not be deprived of the history no matter how unsavoury or unpleasant it might be.

"Oddly enough no attempt has been made to give our youth any real idea of how we won Independence. One academic author did write a book in Malay on Malaysia's Independence, a work which was actually distributed to schools for our boys and girls to read, but the author had completely omitted to associate me with events leading to Independence. My service needs no more to be remembered - I am a 'has been.'

The Tunku wrote the above in 1978. He was treated like a nobody.

It is my sincere hope that other great Malaysians be given proper respect and proper place in our history.

On behalf of the family, I wish to thank you for your write-up on my late father. we are touched. -- Mahrus Ibrahim

Dear Anon, I am touched to see that someone actually realize the contributions of my late grandfather Tan Sri Senu Abdul Rahman. You are right, there are not much left in our history books nowadays. My history project was on my late grandfather and most of my classmates actually asked me who he was and if by chance connected to the Taman Datuk Senu but i wasn't upset for i am proud that i knew my grandfather personally for who he was :)

dear pak syed, very informative posting. need permission from you to include this posting into our web www.siapa-siapa.com. TQ